Last year I had the privilege of receiving an invite to attend a private group tour of the magnificent Taymouth Castle. All doors were open, no restrictions made and photos were allowed anywhere we chose, how could I possibly say no! Well of course I didn’t, I spent nearly the whole day there and the most magnificent day it was! 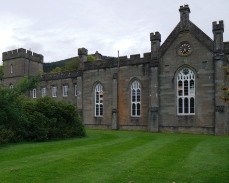 This symbol of luxury and wealth is situated about a mile to the east of Kenmore on Loch Tay. The current building was built in the 19th century however it rests on the cellars of the older Balloch Castle which was built in 1552.

The lands of Taymouth or Balloch Castle as it was once known was the home of Clan Campbell for many centuries and remained in their ownership up until 1922. As you may know, the Campbells are one of Scotlands most notorious Clans with many a story told and many a battle fought. There have been records of them since at least the 13th century however their origins apparently go back much further, back to the time of the Britons of Strathclyde. They have always been a clan with ambition and one rarely crossed without consequence, they have been involved in more battles than I have time to write about and have helped end many a rival clans ambitions, sometimes even ending the clan itself. There was a time they owned land from the east coast to the west coast, land that formed a belt across Scotland which meant they knew the movements of anyone crossing through and you can be sure you only crossed the Campbells lands if they let you. They were a clan of means and they knew it and with the ability to raise an army numbering in the thousands they had little to fear. 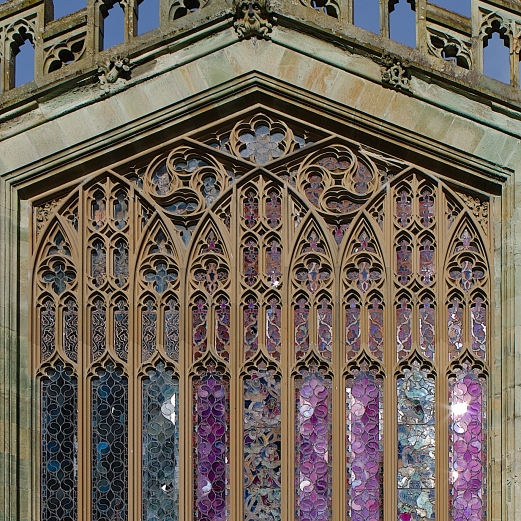 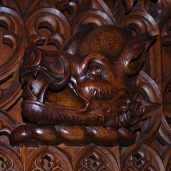 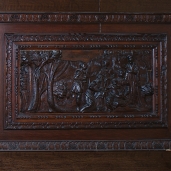 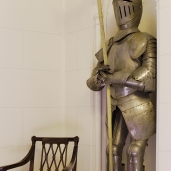 Taymouth is a building of extravagance, of luxury and of power, it excretes opulence and made a statement to other clans that the Campbells were a clan of power and of status.

John Campbell spared no expense rebuilding his home, the intention was to build a more magnificent residence than that of the Duke of Argyll who resided in the beautiful Inveraray Castle. Various architects worked on the building over the years with one of the most famous being James Gillespie Graham, he along with A.W Pugin converted the west wing and the interior. Graham was known for his Gothic style which in later years became more Baronial however at the time of Taymouth both he and Pugin were looking to create a gothic feel. Pugin has often been referred to as the father of Gothic Revival and is well known for other works, mainly for the interior of the Palace of Westminster and Big Ben. There is an unfathomable amount of plaster and painted ceilings within Taymouth, the plaster work was done by the famous plasterer, Francis Bernasconi over a period of 3 years, he is responsible for the breath-taking central staircase. 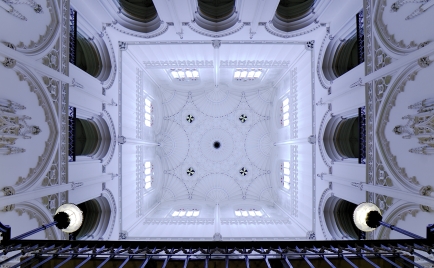 The painted ceilings took a total of 10 years to complete by an Itialian painter of who’s name I do not know. The work is exquisite, the colour, the detail, so many symbols and shields to draw your eye, it’s vibrant and it’s beautiful.

Before the current owners bought Taymouth it had been empty for a number of years, and unfortunately was in a bad way. This was not a project for the faint of heart nor for one with shallow pockets, this was a long term investment with almost no chance of making their money back. The current owners have not only made the promise of restoring this beautiful building but are doing it with no expense spared, they are putting everything back as it once was, the building when finished will be almost as it was back in 1842 when Queen Victoria and Prince Albert visited. I say almost, as it would be impossible to completely replicate everything exactly as it was and the fact it will also be a modern hotel and spa with a world class golf course means there must be some compromise made.

The estate itself is huge (450 acres according to Wikipedia), there are many areas to walk and many sights to see. I’m sorry to say though that I saw very little of the grounds and will one day need to return for a wander. I was lucky enough to have about 5 hours access to the castle and grounds and I spent almost all of it within the castle, even then I missed so many photo opportunities. The fact is I would need days, maybe even weeks to do this building any real justice. The pictures that I have taken will give you an idea of the place but I promise you they pale in significance to the real thing and I am ashamed to say that I missed some vital shots, there was just to much to photograph and not enough time! I do hope one day I get to go back and rectify my errors.

I would like to take this opportunity to say thank you to Jon who is overseeing restoration and to Allan for his refreshments and superb knowledge of Taymouth and its histories, I am grateful to you both. Thanks also goes to the wonderful Christine from the Friends of Cambusnethan Priory Group as she was the person who arranged it all. Although I do not know the names of the owners (it’s a secret!) I would like to thank them also, this is not the first aging property they have taken on and I sincerely hope it will not be the last. They must have deep hearts as well as deep pockets, they know they will never make the money back that has been spent here yet they continue to invest more and more, thank you.

*Due to space, all images in this post are of a low resolution. Should you require a higher quality image please contact me.

© As always, all images subject to copyright and cannot be used or shared without prior permission.

This site uses Akismet to reduce spam. Learn how your comment data is processed.